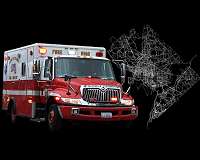 Toronto announced Friday that it will retrofit its fleet of ambulances with solar panels and hybrid electric engines in order to reduce pollution in Canada’s largest metropolis.

The federal government, which has set a national target of slashing carbon emissions by 30 percent below 2005 levels by 2030 under the Paris Agreement, pitched in Can$1.1 million (US$830,000) for the upgrades.