As exciting as the entire Perseverance mission to Mars is, one of the events most looked forward to by us Earthlings must be the first flight of Ingenuity. After conducting numerous checks and double-checks, the Perseverance team has set April 8 as the date on which they hope to attempt the first controlled powered flight […]

NASA Gets a Quick Peek at a Mysterious Layer of the Sun
www.solarenergyconnect.com

A new map of the chromosphere’s magnetic field could help us predict solar weather patterns—and anticipate flares that wreak havoc on the power grid.

An anonymous reader shares a report: Dec. 2 was the 25th anniversary of the Solar and Heliospheric Observatory (SOHO), a joint project from NASA and the European Space Agency. To celebrate, the agencies released a dramatic, nearly 50-minute-long video showing the sun blasting out solar material from 1998 through 2020. The SOHO spacecraft constantly stares […]

Iwastheone shares a report from Observer: NASA’s Hubble Space Telescope has discovered a rare, heavy and immensely valuable asteroid called “16 Psyche” in the Solar System’s main asteroid belt between Mars and Jupiter. Asteroid Psyche is located at roughly 230 million miles (370 million kilometers) from Earth and measures 140 miles (226 kilometers) across, about […]

NASA will announce an exciting new discovery about the Moon from the Stratospheric Observatory for Infrared Astronomy (SOFIA) at a media teleconference at 12 p.m. EDT Monday, Oct. 26. Audio of the teleconference will stream live on the agency’s website. From a press release: This new discovery contributes to NASA’s efforts to learn about the […] 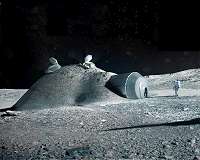 Houston TX (SPX) Sep 29, 2020 HeroX, the social network for innovation and the world’s leading platform for crowdsourced solutions, has launched the prize competition “NASA’s Watts on the Moon Challenge” on behalf of NASA. In support of the agency’s Artemis program to land the first woman and the next man on the Moon, NASA […]

British researchers have identified 50 new planets using artificial intelligence, marking a technological breakthrough in astronomy. CNN reports: Astronomers and computer scientists from the University of Warwick built a machine learning algorithm to dig through old NASA data containing thousands of potential planet candidates. It’s not always clear, however, which of these candidates are genuine. […]

“NASA’s Juno Jupiter probe has captured unprecedented views of the largest moon in the solar system,” reports Space.com: During a close flyby of Jupiter on Dec. 26, 2019, Juno mapped the north polar regions of the icy satellite Ganymede in infrared light, something no other spacecraft had done before. The data, which Juno gathered using […]