An anonymous reader quotes a report from Popular Mechanics: Scientists are going back to the salt mines, literally, to find a revolutionary new way to store large quantities of hydrogen for energy. Proponents say this could be a step toward unlocking hydrogen for renewables — something that could change the energy landscape if it were […] 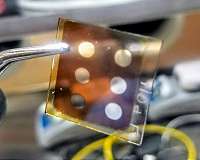 Ames IA (SPX) May 05, 2020 Perovskites with their crystal structures and promising electro-optical properties could be the active ingredient that makes the next generation of low-cost, efficient, lightweight and flexible solar cells. A problem with the current generation of silicon solar cells is their relatively low efficiency at converting solar energy into electricity, said […]

Engineers make a promising material stable enough for use in solar cells
www.solarenergyconnect.com

West Lafayette IN (SPX) Apr 30, 2020 Soft and flexible materials called halide perovskites could make solar cells more efficient at significantly less cost, but they’re too unstable to use. A Purdue University-led research team has found a way to make halide perovskites stable enough by inhibiting the ion movement that makes them rapidly degrade, […]