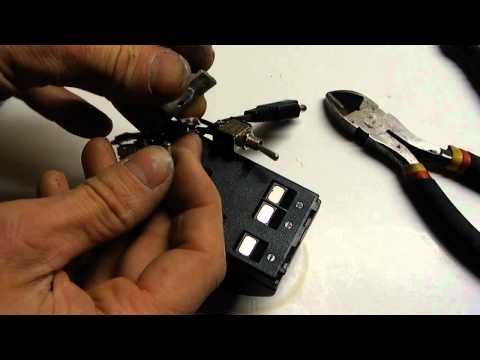 This video is the chronicling of the making of a small solar powered portable USB charger for charging cameras, mp3 players, ipods, blackberry, or any other mobile device that will charge from a usb port.

The power storage on this device is achieved through the use of a clearance $7 radio shack camcorder battery. The battery is 6 volts and 2700mah.

Although the battery may be at risk for slightly overcharging, it’s highly unlikely that it will actually do much damage since a float charger would probably give around 5% anyway. Combined with the fact that it will be a slow charge (roughly 32.4 hours of daylight) instead of using fast charging commercial methods, I’ll probably see more life out of this battery than if I charge it with an actual charger.

A single pole double throw switch is used to switch between the charging terminals and the power for the USB device. I did this primarily because the voltage regulator I use to regulate the power to the USB port has a 2mah draw on standby. Given that this device needs to be as efficient as possible, I chose to have a switch so the voltage regulator would not be on while the battery is charging.

The voltage regulator used is a 5 volt low dropout regulator, which drops maybe .7 volts at most, which is perfect considering the battery is giving roughly 5.85 volts out of the box without an initial charge (the cells need to be broken in).

My blackberry’s battery is 1100mah, so I should be able to get 2 full charges from a COMPLETELY dead battery and still have a little juice left over on one battery charge. Given 8 hours of good sunlight, the battery on the USB charging device should charge in approximately 4 days.

So this is not a permanent use supply, but at least 2 full charges per week can be a great emergency charging device when your out of reach from your charger or other power source. I’m thinking long bike rides, camping, beach, etc,…

Feel free to suggest improvements, as I’m always looking to better the devices I make. Also, feel free to ask questions; however, I’m not extremely knowledgeable in the subject.

Special thanks to Kevin MacLeod at incompetech.com for the music. His song “harmful or fatal” is Licensed under Creative Commons “Attribution 3.0” http://creativecommons.org/licenses/by/3.0/

I did it with Avasva plans.

I'm sure that you will find good way to make it on Inplix Website.

Cool but wayyy too messy. Why not use a bit of protoboard to tidy it up a bit?

Nice job, I have a question about the 88k Ohm resistor on pols 2 & 3….Most other YT videos show 100 Ohm on each pole going to 5v plus….Can you explain why you are using a 88K ? Help appreciated….Check out my video at watch?v=SiB-1OV8Vpg&feature=youtu.be