Solar Panels on a Tesla 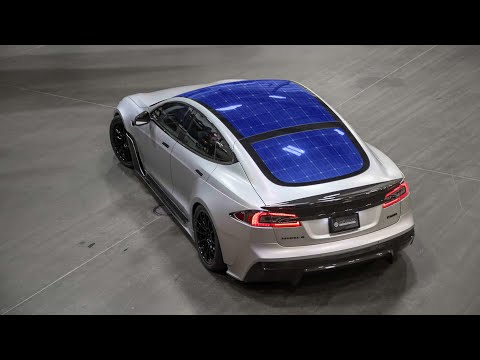 Electric cars and solar panels seem like a match made in heaven: free, clean power as long as the sun shines. A self reliant, solar car that’s not dependent on the power grid could recharge sustainably from anywhere you dare to venture.

So, have you ever wondered about bolting solar panels on your Tesla? And why don’t all electric cars come equipped with solar panels for a sleek charge-on-the-go solution? In fact, with improving solar technology and clever ground-up engineering, a few self-charging solar cars are just at the point of coming to market. In this video we’ll delve into the practicalities of solar power for vehicles and have a look at some of the early adopters of this emerging technology.

In 2017, Elon Musk suggested that Tesla would offer optional solar tiles on the roof of the model 3, but later retracted the statement. This was Elon Musk’s idea in 2017 – that car roofs are small and inefficiently angled platforms for viable solar installations, and charging from a home solar installation made more sense. You could even charge at night on stored solar and cheaper off peak electricity. However, Elon might have changed his mind, confirming that the Cybertruck will offer a solar roof option on the truck’s bed.

To understand if a solar car could really work, we need to find out how much solar energy the surface of a car can capture, and how much range that energy will provide under realistic driving conditions.

When it comes down to it, solar vehicles are all about efficiency. It’s a matter of energy to weight. A practical solar car would really need to be designed from the ground up with reduced weight and low aerodynamic drag, to create a vehicle with more favorable energy density. For as far as electric cars have come in the last decade, the energy density of gasoline is still far greater than lithium ion batteries.

Teams gather each year in Australia to race pure solar cars across the continent from Darwin to Adelaide under the scorching desert sun for the World Solar Challenge. Consistent winners of this class have been the evolving Stella series from the University of Eindhoven, the team from which Lightyear sprang in 2016. Lightyear one reevaluated every component of the car and used lighter materials like aluminum and carbon fiber, to build a lighter vehicle with the best aerodynamic coefficient of any car on the market. Four independently driven in-wheel motors also lower the cars weight, and improve powertrain efficiency.

Toyota has experimented with a demonstration Prius with high efficiency thin-film triple junction cells made by Sharp, and Hanergy Solar, a Chinese manufacturer of thin film panels, have also demonstrated prototype cars with panels that can harvest 8-10 kWh per day and supplied such panels to Aston Martin for their GTE racing car.

Most solar panels rely on cells made from semiconducting silicon crystals, which convert sunlight to electricity at around 15%-19%, but new technologies are in the works to create higher efficiency solar cells utilizing new materials. As the future unfolds, and more cutting edge solar technologies come to market, we can see self charging solar electric vehicles become more and more practical, as cells get more and more efficient. A future cell technology with efficiencies above 50% would be a game changer, and probably make solar cars ubiquitous.

Heavy batteries are a limiting factor in the feasibility of solar cars. A breakthrough battery with more favorable energy to weight characteristics would revolutionize electric transportation, and make solar cars far more realistic.

Promising new technologies that utilize materials like graphene, solid polymers, and ceramics are currently in research and development, and are poised to create the next generation of powerful batteries with higher energy density, greater service life, faster charging, improved safety, and potentially even lower costs.

So should you mount a solar panel on your Tesla to make it a solar tesla? Watch the video to find out.

mate get your fact corrects solar panels do not need sunny days to work they work fine in all daylight just not as well as in direct sun light!

orrrrrrr we put solar panels over the entire earth and wirelessly transmit the energy on roads to keep all vehicles charged.

Does it work if the 2 motors from the car, one will charge/drive or via activation, and the other will only drive the car?

JuSt MakE thE DoOrS opEN uP iNsTeaD of sIdEwAyS

Good video. Instead of Solar Panels on a Tesla, how about a solar trailer. Design and build a light weight trailer with solar panels and batteries that can be towed by a Tesla or Prius. In this manner, you may be able to travel the country indefinitely without external charging. Travel during the day. Park it around 5PM. Let the batteries charge in the last couple hours of the day. I think I would use a plug in hybrid for this because there will be a few cases where you need to drive at night.

"Do I believe in an 'Electric Future?' Well, I believe in the MARKET and it's ability to make the best decision. What I DON'T Believe in is Govt stealing MY RESOURCES because of the POLITICAL POWER of some environmental groups and their ability to effect legislation and the Tax code. There's a term for those who seek to achieve their ends in that manner and that term is FASCISM, pure & simple.

Nikola Tesla rebirth himself in the person of Elon Musk

Energy density was a nice metric you thorough out, but I remember that utilization of said energy wasn't 1 to 1. Meaning that out of that 48MJ the gas holds your not going to get 48MJ amount of work utilized as the combustion engine wastes a good bit of that energy.