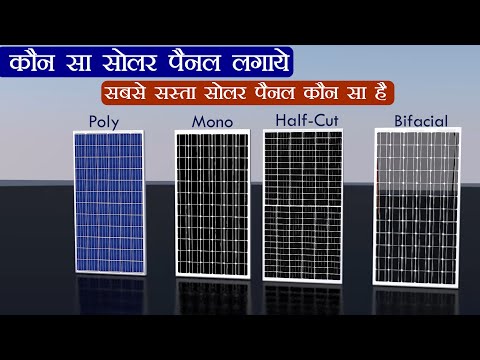 Solar Panels, which converts sunlight into electricity. It is a clean and renewal source of energy which reduces carbon emission, reduces electricity bill for a home owner, and has life expectancy of 25-30 years.

Mono Crystalline Solar Panel – Made of pure Silicon cells, that generates higher power, Made of Mono Perk cells with size 156 mm and 156 mm, it looks blackish in color.

Half-cell modules have solar cells that are cut in half, which improves the module’s performance and durability. Traditional 60- and 72-cell panels will have 120 and 144 half-cut cells, respectively. When solar cells are halved, their current is also halved, so resistive losses are lowered and the cells can produce a little more power.

Bifacial modules produce solar power from both sides of the panel. Whereas traditional opaque-backsheeted panels are monofacial, bifacial modules expose both the front and backside of the solar cells. When bifacial modules are installed on a highly reflective surface (like a white TPO roof or on the ground with light-colored stones), some bifacial module manufacturers claim up to a 30% increase in production just from the extra power generated from the rear.

Nice video sir thank you for the information

Very informative thank you Sir. Poly panel cost is very high 55 Rs per watts in Imphal(North East) Can I buy online from amazone.