Is The Tesla V3 Solar Roof Worth The Money?

– Last year, when I looked at the Tesla Solar Roof, I determined that it was still not worth it in terms of a financial investment compared to just adding solar panels to my existing roof, or getting a new roof and then adding panels to it.
since then, Tesla released Version Three, and has dropped the price by thousands of dollars.
So, I thought we could just have another look and see whether or not it makes financial sense to buy and install a brand new Tesla Solar Roof. Let’s free the data.
If you’ve been following the channel for a while, you’ll know that this is my third Tesla Solar Roof video, with the first one uploaded all the way back in 2016.
Back then, Elon made some big claims, saying it would look better than a normal roof and generate electricity, last longer, and more. But then, we waited and nothing seemed to happen.
That was until March of 2019 when Elon told us 2019 would be the year of the Solar Roof.
alas, the Model 3 production ended up taking almost all of Tesla’s focus, and everything just seemed to stop.
So, we waited some more. (fingers tapping) And now here we are in 2020 and I’m wondering whether or not it makes sense now, especially given how low interest rates in the current pandemic.
When I looked back at this in 2019, the calculator on the Tesla website estimated that a Solar Roof would cost about $75,000 for a 2,000 square-foot house. Using the calculator at the time, what I found was that it was actually a 33% premium for the Solar glass versus just a new roof and solar panels, so, really, it didn’t make a lot of sense.
0
Like
Save
Share

Is The Tesla V3 Solar Roof Worth The Money? 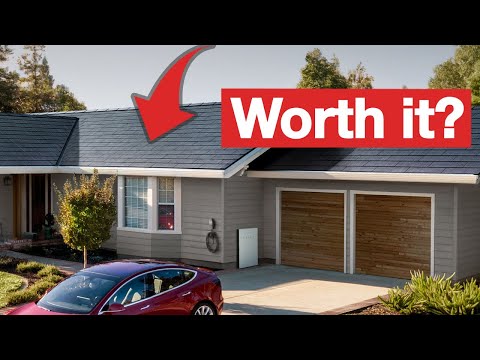 In this video, I’m taking another look at the Tesla v3 Solar Roof to see if it will make financial sense to buy and install a brand new Tesla Solar Roof.

Could we get a deep dive in virtual power plant.

Your audio is really crisp! What microphone are you using? And what camera too??

Tesla solar is a rip-off!

Are you have interseted in test hansshow tesla electric tailgate?

I got a quote for a Tesla solar roof and was very disappointed. The quote was very different than the website (much higher cost) and the system was smaller (7.5kW instead of 10kW). The final nail was that the projected energy yearly output was only 40% of what I expected. Don’t trust the website to be accurate.

Very nice analysis! Having been a roofer, the comparison of premium roofing types is spot on and makes you realize what deal it ultimately ends up being. As much as I love the look of the Tesla roof I ended up installing my own system last year. Saving those install costs help a ton. I came out to 7,600 after federal and state tax deductions for 9.5kw worth of panels on a 7.7kw inverter.

My house needs a new roof soon. I got quotes earlier this year from the standard places. I put my deposit down on a solar glass roof but I am out of the service area. I am going to wait and see for as long as I can before choosing a company.

"The glass is glass" – Funny stuff!

We are installing approx a 6000 m2 solar roof in the next four years for our factory, a CLT prefabrication plant to build a passive house certified building integrates into a microgrid community of houses and apartments. All the new building will have a new PV roof and battery system, they will be all connected together to form a microgrid.

Great for the Southern states, But it just doesn't sound economical for at least half of the U.S. states. I can't even get solar panels to payoff or break even any sooner then 25-30-Years. After that everything needs replaced again….

Great analysis Ben. I few years ago I’d have definitely gone for it. But I sold my old house and moved into a small mountain home (just under 1000sq of roof) and much of it in the shade. But there’s still a part of me that wants to go for it, I’ll need a new roof soon.

Glass do last. It just get dirty and dusty more then other material

why aren't you factoring in the home value change in your model? Aesthetics play a key role in value of home and tile + solar is likely going to have less market value than solar roof.

Thanks Ben!
It looks like one of the benefits of the solar roof over panels would be maximizing solar production….beyond your needs… to sell back to the grid or a community battery storage site.

I paid for a Solar install quote from Tesla. I got an email that day from someone, I replied….never heard back. I don't understand why the company is such a black hole of info. I updated my quote on the app as requested and after a week I did not get a reply. I got my money back for the quote.

Is it Asphalt or Asphault?

If only Tim could keep his videos so short and to the point ! 😉

When will solar be priced for average income people?

So, Tesla, maybe, for people in California. Not so much for everywhere else in the world. 🙄