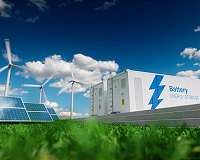 Indonesia said Wednesday it had signed a $9.8 billion electric vehicle battery deal with South Korea’s LG as it moves to become a global production hub for the green technology.

The agreement was signed in mid-December, with investments planned in production and supply chains for lithium batteries, which rely on nickel.

Mineral-rich Indonesia is a major producer of the metal.