How much heat such DIY solar heaters give us 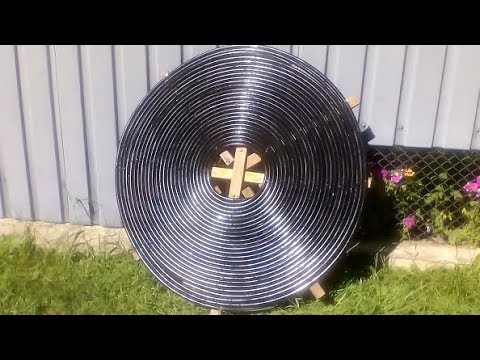 I made these solar heaters only to measure their energy parameters, and first I made this variant from a cheap polyethylene pipe. Then I measured the energy parameters of this 2nd variant which is characterized in that its pipes lie on a black surface. This is my 3rd variant which is similar to the 1st variant, but with large gaps between adjacent pipes. Then I tested this 4th variant, and we see large gaps between its pipes, like the 3rd variant, but the pipes lie on a black surface, and its north side has thermal insulation.

The main results of my tests are described by these graphs and tables which will be explained during this video.

This is my measurement of the energy parameters of my four variants of the cheap solar heaters. However I want to clarify that I used such cheap polyethylene pipe with an outer diameter of 16 mm and a wall thickness of almost 2 mm. The Ukrainian prices of this cheapest pipe are about 15 American cents per meter, and we can calculate that complete covering each square meter by this pipe is about 10 dollars.

In addition, I painted my pipes, and now this half of the solar heater is already covered in black paint which increases the efficiency of the heater and protects the plastic from ultraviolet solar radiation.

So, a square meter of our solar heaters is several times cheaper than these traditional pool heaters, but we can see that their energy parameters noticeably better than our solar heaters. That is why our square meter will produce significantly less heat, and this is due to the fact that our black pipes do not cover the whole surface of the heaters.

For example, the pipes cover only 66 % of the surface of my 2nd variant because we see small gaps between adjacent pipes. In addition, these areas are not covered by the pipes, and I want to clarify that the coverage area is the multiplication of the pipe length by its outer diameter.

The length of the pipes of my 4th variant is even 2 times smaller, and they cover only 33 % of the surface of the heater.

My 1st variant is covered with pipes by 73 % if we think that this square is the area of the heater, and this is a fair idea if we remember how neighboring heaters are placed.

The area of the 3rd variant of my heater is covered with the pipes only by 37 %.

This table shows the heat production of one square meter of my four variants of the heaters during an absolutely sunny day in Europe, the United States and India. These are cases where the solar heaters must heat swimming pool water with a temperature of 30 ºC.

It is interesting to compare our heat production with these more durable and expensive solar pool heaters. We see that one square meter of expensive heaters produce significantly more heat, but our square meter is several times cheaper. That is why our heaters can make economic sense if we do not have a deficit of space for the location of our solar heaters.

In addition, we can remember that such heaters are sometimes used for a primitive shower. Now we see that the sun has heated the water inside the black pipes of my heater to 67 ºC when the temperature of the ambient air was 28 ºC.

This graph describes the heating capacity of one meter of my black pipe for my four variants for different temperature differences between the heater water and ambient air.

Thank you so much for conducting these tests and sharing the results!

I like your project, but I would make one suggestion. You're losing a lot of heat energy because of the reflectivity of the tubing. I'd use a flat, or matte, black paint for better heat absorption.

I like your proposal and thesis.
I will put it into practice.
I read your answer to a comment about the possibility that it works in winter with snow.

I think it can work with a system of 3 conductive hose systems is placed in which the first phase is responsible for “melting” the snow or ice and then pass by GRAVITY to the second team …, in order to "force" the conduction of water.

I wonder if you placed a clear plastic sheet over the black painted coil if that would decrease the heat loss to the air significantly. I would like to see the breakdown of the cost for the variants of these heaters.

You need a better narrator. Can hardly understand you

Have you considered building a solar air heater, which is more effective and easier to make?

There are a lot of free plans and instructions on the net, such as: https://freeonplate.com/diy-solar-panels/
I think there are also some numbers showing efficiency.

Instead. of covering it with polycarbonate, why don't you cover it with glass, since the transparence is better. And glass does not degrade bcos of UV.

Very good experiments. I would like to see a build of your best version. I have built a 48" square box with 0.75" x 3.5" walls with foil coated 25mm foam on base painted flat black sitting on 0.75" supports using 16mm x 30m held by wire ties with corrugated polycarbonate with edges sealed with foam.

Sergei, you have made many experiments now, is it soon time for a home build with all the information and data you have gathered? I’d like to see your choice and build and heat returns, thanks as always

sergiy this system is the water in the winter if the water is 10 c ,how many degrees the water l want to do my istanbul

Did you actually take your heaters to Munich, Phoenix and Mumbay for a test? Oh, I see, (calculation, not experiment). But – can these heaters be used in winter (freezing overnight)?