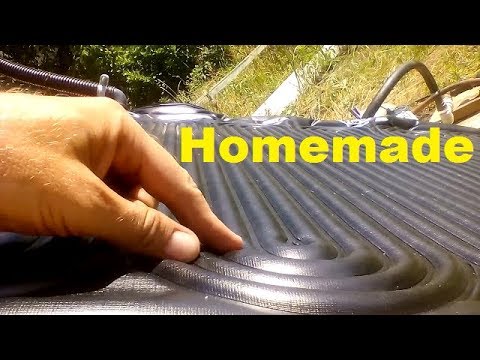 We know about these solar heaters which are used to heat water of a pool, and many of you came up with the idea of turning them into similar flat plate solar collectors because these collectors are several times more expensive than the solar pool heaters. Let’s take a look at how I put this idea into practice when I used this solar pool heater, put it on a sheet of expanded polystyrene, and covered it with a cheap transparent film. But it is obvious that such solar collector will be more efficient if we use a glass sheet or a cellular polycarbonate instead of the transparent film.

This is one of my experiments, and here we see that water leaves the solar pool heater under a transparent film, and the water temperature is almost 95 ºC when the ambient temperature was 26 ºC. But this water was not moving inside the heater for a long time, and it is obvious that the heating temperature will be less if the water is circulated through the heater.

This is another my experiment when the pool heater under the transparent film has heated twenty six liters of water of this tank from a temperature of 20 ºC to 55 ºC for 2 hours. But now I show the sky during that heating, and we see that a large number of clouds prevented the heating to a higher temperature, and the ambient temperature was only 20 ºC.

So, we have many opportunities to buy a solar pool heater, and cover it with a transparent film, glass sheet or cellular polycarbonate. But I used this pool heater which was made in China from two glued PVC films with a thickness of about 0.5 mm and with these dimensions. Now I am showing the proposals of different sellers of that Chinese solar heater, and I bought it for $18 from one of the Ukrainian sellers. We can calculate that it is about 12 $ / sq. m of the black heater including these unnecessary plastic things.

We must understand that it is several times cheaper than these conventional pool heaters, and this solar collector based on that Chinese heater is about 10 times cheaper than these flat plate solar collectors which consist of this glass, this thermal insulation, and this expensive metal absorber that we replace by this cheap Chinese polymer product or by some other inexpensive solar pool heater.

Secondly, these pool heaters usually have a shorter lifespan because solar radiation is gradually destroying their polymers. In addition, their lifespan will be even less due to the fact that we violate their operation manual when we cover them with a transparent film, glass or other type of transparent sheets.

Third, we know that these expensive flat-plate solar collectors are able to withstand high temperatures of about 200 ºC during their stagnation. But it is obvious that the polymers of these pool heaters can be destroyed by the high temperature of their stagnation under a glass sheet or other transparent covering. Therefore they require such experiments which have already been done by me for cases of the stagnation of that Chinese heater under a transparent film, and the last minutes of this video will show these experiments.

This cheap Chinese heater has additional problems, and for example, it has these three inlets and outlets instead of the conventional two, and these inlets have an inconvenient direction. In addition, the outer diameter of the inlets and outlets is too large, and it is = 32 mm. Moreover, we see these signs of deformation of the Chinese heater when it is filled with water, and these deformations can prevent its fixation inside the body of its solar collector.

Can we use coolant oil to absorb more heat and transfer the heat absorbed through a heat exchanger.

Switch the pump off when the water's hot and use a drain back design.

From were we can buy this

Thanks a lot for all your hard work to give us these details.

hello sergiy! why did you delete your old videos?

Hello Sergiy. Thank you so much for publishing your fantastic work here. Many thanks.

Thanks a lot sergiy, but y think you could put a Asphalt bed in each solar pool colector because recent search published in Brazil by our the usp university to proof that good Asphalt as bed for cooper tubes to maintannance its daily high thermal 50 o C up to 20:30 hours (8:30 PM)

Do you have a link for the pool heater…?

I made one with a central heating radiator for my hot water for a while….put it in a wooden box with thin reflective foil for insulation. Worked OK, it was only a very small one and I didn't monitor temps…it could have been much improved. I now use an immersion element from photovoltaic because it is maintenance free. It would be good to see you try this with your scientific approach and discipline. Best wishes. FreeJulianAssangeFreePalestineFreeUsAll.

Thank you, Sergiy. Your videos are excellent! 😎

all how many usd dollars and how many degrees of water temperature in winter?

Way better with your own voice instead of the robot voice! Keep up the job. I love it!

Hi,great work. i would sugest measuring not only the outcoming water temp, but also the ingoing water temperature with flow rate, to calculate energy captured. The outgoing temperature of water after standing still for a few hours doesnt mean much.